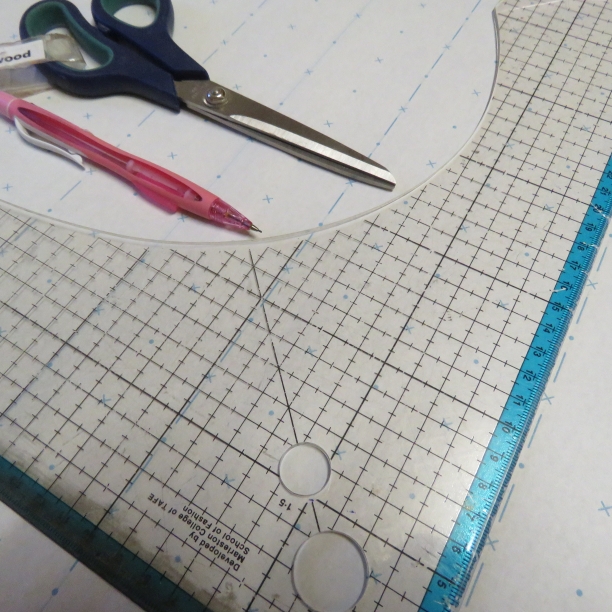 Zero waste patternmaking is going through a time of experimentation, both with actual patterns and how it can be applied to clothing manufacture.

I’ve been experimenting with zero waste patterns for the past 4 years and been challenged, had fun, stretched my brain and found it unexpectedly freeing. Here are some of the discoveries and challenges…

Zero waste patterns are designed to fit a particular width fabric and will have to be redesigned if the fabric is a different width. Or do they? Sometimes yes and sometimes no.

I was careful about fabric widths when I started writing Zero Waste Sewing because I wanted to use common widths to make the projects as accessible as possible, however fabrics don’t always come in the “as advertised” widths and may measure up to 5cm either side. When I worked as a clothing cutter I saw significant variations in fabric widths – we had to measure all the rolls to find the narrowest one and then make the layout according to that width.

I’d thought fabric width was an unwavering, inflexible, cannot-be-negotiated factor in zero waste patternmaking, but I discovered that in many cases an approximate width was acceptable. The pattern could be be tweaked to work with whatever was available without too much hassle.

Having said that, there are many ways of making a zero waste pattern, just as there are with regular patterns. Mine tend to be drawn straight onto the fabric (thus saving paper too) but other patternmakers do their layouts on computers, achieving more complex shapes and less flexiblity with fabric widths. Here’s the layout for Danielle Elsener’s zero waste scrub top:

You can see that it’s made for a certain size only of fabric.

However, even when the fabric isn’t the right width, all is not lost: a rectangular strip off the side is far easier to use later than irregular scrappy bits. Designers can use fabric across several garments and therefore still achieve zero waste.

There is a temptation to make zero waste clothes very basic because it’s easier to do or accommodate more sizes. There isn’t anything particularly wrong with this. Simple shapes showcase fabulous textiles, and many traditional clothing shapes are breathtakingly simple: caftans and ponchos are a rectangle with a hole for the head, saris are a length wrapped around the body and the ancestor of the kilt was pleated fabric held with a belt.

We have an opportunity with zero waste patterns to push creativity and think about pattern cutting in new ways. While patterns don’t have to be complex to be effective, we don’t have to do rectangles with a hole for the head.

I feel strongly that zero waste fashions need to be just as good if not better/more interesting/more wearable than regular clothes, so that they’re chosen because they’re well-designed in addition to being zero waste.

Making a zero waste pattern in multiple sizes isn’t as easy as regular patterns. Or rather, the process is different. There are a few ways to go about making multiple sizes, but sizing needs to be thought about as the pattern is being made, not afterwards.

It’s not really that hard to make a single size zero waste pattern. But can you do it in five sizes? Eleven sizes? As well as trying to fit larger sizes within the physical limit of the fabric’s selvedges, the pieces change proportions as they’re graded, so they don’t fit together in the same way.

An example is this jumpsuit which unfortunately didn’t make it into the book. A single size was very achievable, but things got messy when I tried to extend the size range. I did it in sizes 8-20 (which was all the fabric width allowed for) but every size had different shaped details (pockets, tie, etc) which is okay but lead to lack of clarity in pattern writing. I do like it though; I’ve been wearing the sample for Me Made May. A similar free pattern is here.

In industry, strong collaboration between development and production teams brings about creative solutions and a richer process, and this is just what making zero waste clothes needs. Zero waste is more than just the pattern, and everyone, particularly workers who do the actual making, can offer solutions to make things easier, faster, better or more economical.

I have been lucky in my career to work in places with in-house manufacturing, where I could just walk over and ask a question to makers, who often had a lifetime of sewing experience. It’s a good feeling to work together in a team with a common goal.

Why is this more necessary for zero waste clothes? The design, pattern and cutting layout develop simultaneously, rather than the current way of a designer doing a sketch and handing it to a patternmaker to make the pattern, then a cutter creating a layout. It requires collaboration between the designer and technical people/makers because the designing occurs with the pattern, and the design choices affect the cutting layout. Sewing-wise, zero waste pattern pieces can be unusually shaped and the construction might be unorthodox, requiring good communication with the people sewing it.

Zero waste is a worthy goal, and one that we need to keep pursuing. However, it shouldn’t be at the expense of fit and appearance, otherwise, what’s the point? It’s better to have a pattern that’s minimal waste.

Here’s another zero waste project that didn’t make it into the book. It’s some culottes overalls that I never really nailed in terms of shape, and I suspected that the bib would get too tall and narrow for larger sizes. I finished off the sample to wear but the corduroy runs in different directions and one leg has a godet in it!

I’ve since returned to this pattern and will use some of the ideas in a different way.

Some fabrics lend themselves easily to zero waste patterns and others don’t. Easiest fabric ever would have to be boiled wool – it doesn’t fray, looks the same on both sides, comes in wide widths, can be used in any direction and comes in good colours.

Trickier fabrics to use include napped, one-way fabrics and border prints. Stripes and checks can also be challenging if you want them to match at the seams or run in a particular way. While these can be harder to use, they can be more rewarding.

Going absolutely zero waste in the sewing world is difficult, just as it is for a household.

The question is, how zero should zero waste be? By definition it’s zero, however some people are looser in their definition than others. Should you count interfacing and trims? What about the strip from straightening the fabric’s edge? The single-use tough plastic the fabric came wrapped in? The plastic cones the thread came on? The trimmings from the overlocker? All sounds kind of overwhelming…

As with households, the journey to zero waste starts small and progresses, and it’s something we can keep working towards with optimism and perseverance, and of course creativity. Patternmaking-wise, it takes some practice but it’s really fun and the more patterns you do the easier it is for your brain to think up solutions. If a pattern ends up minimal waste instead of zero waste, you might be able to improve on it in the future.

What things could influence the use of more zero waste patterncutting in fashion?

A growing number of fashion schools are offering not just sustainability studies but placing fashion’s social and environmental impact at the core of their teaching. Education is where change can happen!

Two other things come to mind. One is the pandemic, which could bring more manufacturing back to a local level where collaboration between production teams is easier. The other is new technology, such as digital 3D design (here’s an example – this is way beyond my realm!) which cuts down the time and fabric use for sampling and patternmaking. Read more about this here.