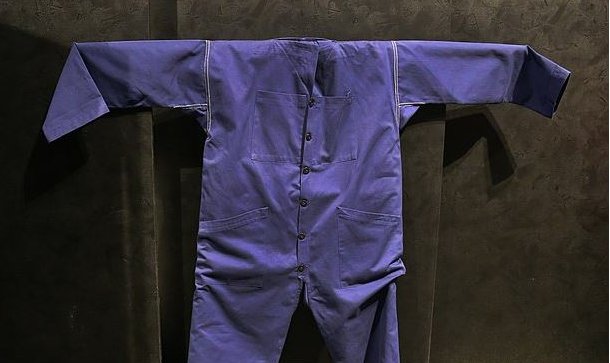 It’s been 99 years since the launch of what we now call the jumpsuit. Its inventor was Italian futurist artist Ernesto Michahelles (who adopted the palindrome pseudonym Thayaht) in collaboration with his younger brother Ruggero Alfredo Michahelles (known as RAM).

The new garment was named the Tuta. In Italian the word tutta means all-in-one/whole/a unified thing. Some suggest that the missing “t” in Tuta is the shape of the Tuta itself.

The Tuta was designed as a utopian garment for all people, for all situations, affordable, easy to sew and cut with minimal fabric wastage. Its simplicity and versatility were in contrast to the haute couture of the day. Thayaht published the instructions for cutting and sewing in the Florentine newspaper La Nazione and he proclaimed it “the most innovative, futuristic garment ever produced in the history of Italian fashion.”

Here’s a Tuta from 1920 in the Museum of Tissu in Prato, near Florence:

A two minute English language video of the museum’s 2007 exhibition is here. Shown are further developments of the Tuta – a women’s version and a two-piece Tuta he called the Bituta.

[Btw, if you’ve read Betty Kirke’s book Vionnet, you may recall that Vionnet collaborated with Thayaht. Here’s a two minute video of some of the sketches he did for her.]

Are you thinking what I was: was there any precedent for the jumpsuit?

So there wasn’t really anything like it, not with the same ideals and intent.

Some years later, in 1923, Russian constructivist artists Alexander Rodchenko and Varvara Stepanova created The Vast, which like the Tuta reflected utilitarian functionality and removed gender and class distinctions.

In the 1930’s fellow Italian Elsa Schiaparelli designed women’s jumpsuits but trousers were still considered daring for women to wear.

The 60’s and 70’s saw renewed interest in the jumpsuit as a fashion item. Abba, Cher, The Bee Gees and Elvis all wore them. Versions were also worn by racing car drivers, astronauts and superheros.

Jumpsuits experienced a lull in favour in the late 80’s and 90’s. I remember learning to make patterns for jumpsuits as a fashion student, thinking: when am I ever going to have to do this?

And now it seems one’s wardrobe is incomplete without at least one jumpsuit.

Thayaht’s cutting plan for a jumpsuit is very useful (the measurements are on the newspaper clipping) and includes some innovative details:

Last year I attempted a zero waste jumpsuit based on the Tuta. Mine was a little different (it had side seams, a diamond crotch gusset and extended sleeves) but it was a good learning experience transferable to the Tuta. My notes:

This week I plan to run up a Tuta and see how it goes.

I should add that I’ve never worn a jumpsuit in my life (except to strip paint, but that was worn over other clothes). I’ve done a few patterns and sewn a few, but I hope this will be a new addition to my wardrobe.