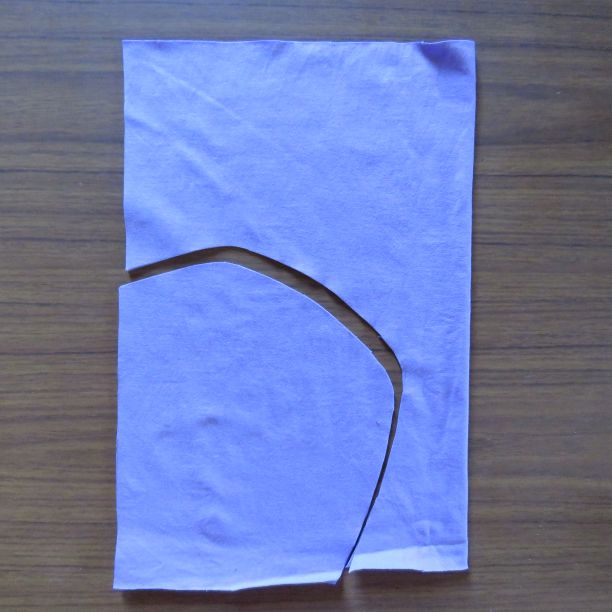 I’ve been thinking about the zero waste underpants I made last week from Zero Waste Wardrobe’s free pattern.

Since then, some others have tried the pattern. Donna-in-the-comments made some in swimwear fabric. She left the legs unhemmed and cut a conventional gusset from a different fabric. @duckgoesoink made a beautiful red pair with lace trim. @thegirlwiththesewingmachine made a pair in a cute print fabric. All of them changed the centre seam from the front to the back.

I wondered if the pattern could be tweaked to give more bottom coverage?

Yesterday I had another go. I taped the pattern back together and re-drew the leg cut, aiming for a full brief with bottom coverage. I lowered the side seam at the back and added onto the front waist.

I sacrificed the gusset in the name of bottom coverage, so now the gusset needs to be cut separately and the gusset isn’t zero waste. Not sure what to do about that but I’ll think it over. UPDATE: problem solved here.

Zero Waste Wardrobe’s patterns are produced under a creative commons license (translation here) which allows derivatives provided the original author is mentioned, it’s not for commercial purposes and derivatives also have the same license. With that, here’s a PDF of mine:

Here they are run up in a long straight stitch (sans gusset, at the moment):

As is seen in swimwear, the gusset is only joined in at the back and sides, forming a pocket. Some people prefer this for their undies, so they don’t see a front seam. (I don’t because it’s a lint trap and my fabric curls, but I can live with it.)

I was going to cut strips of fabric to use as leg bands, but because the crotch turned out wide and the leg cut is low, it really needed elastic with a 1cm turn under. I found some ancient plastic elastic to use.

Here’s a pro-tip from the machinists at Jem Leotards: the elastic shouldn’t be stitched on evenly around the leg, because it needs to sit flatter at the front (where less gathering is needed) and be pulled tighter around the back (to sit around one’s bottom). Here’s how to do it:

Now move the halfway point of the elastic 1.2cm/half inch towards the front. When you sew, you’ll be pulling the elastic tighter at the back and less tight at the front.

Stitch the elastic on with a long straight stitch on the wrong side of the edge. Try the undies on to check, then fold under and stitch it down with a stretch stitch.

Exactly the same method can be used for leg bands.

The Jem machinists didn’t actually use pins or do it this way – instead, they tensioned the back and front elastic just by feel as they fed it through the elastic-putting-on machine, such was their experience. Then each leg was measured for quality control but they were never wrong. I tried it but it was really hard! I remember them saying: just let it flow through your fingers !

I made a bad job of stitching the elastic on and I’m too embarrassed to show you on this blog. They’re okay to wear but not my best work.

The undies Mark II have good bottom coverage and they’re fabulously comfortable – everything this full-brief wearer could want in a pair of undies.

I’m still adverse to posting pictures of myself in underwear on the Internet, however here’s a charcoal rendering of the back and front:

Thank you Saara Jolkkonen of Zero Waste Wardrobe for a fun and ground-breaking pattern.