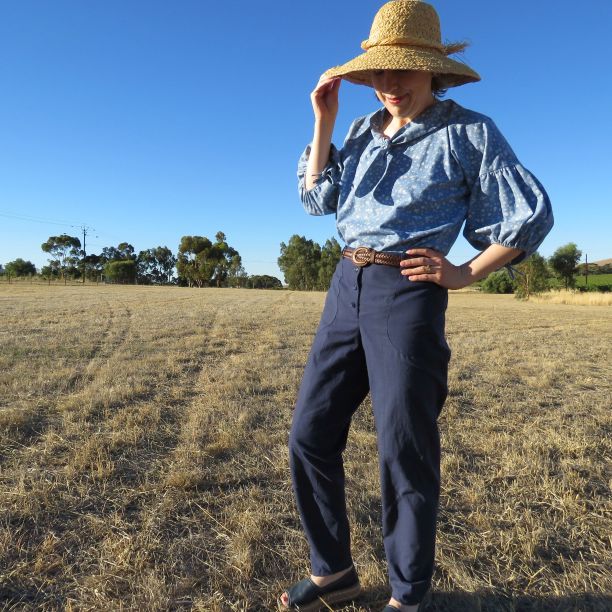 These unusual trousers have been on my mind for some time, but I didn’t feel brave enough to try them until I saw Sue Stoney’s blog post on them and saw Holly demonstrate how they’re constructed at an online zero waste workshop.

The pattern appears in the book Zero Waste Fashion Design as just a layout and a garment sketch. It doesn’t have measurements or sewing instructions; it’s offered as a starting point for experimentation.

However, others have made them: @stikleif on Instagram has made them as full-length trousers, shorts, capris, and yoga pants; Modconned wrote a blog post; Anouk van de Visch made a tie-dyed pair; Kathleen Fasanella trialed a pair in calico; and they’re on the Make/Use website. The #spiraltrousers page on Instagram shows pairs made in striped fabric. If you’re planning to make a pair, I highly recommend looking at all of these; it’s such a big help.

The legs are triangular pattern pieces – so unlike any other trouser pattern and an example of the kind of creative patternmaking wrought by the parameter of zero waste.

Here are the pieces cut out:

Below is an explanation of the pattern pieces. Each triangle is a leg, with the crotch cutout being used for pockets. You can see that the ankle is on the bias and the waist is on the straight. The waist isn’t actually half the waist measurement; it just wraps half way around the body and needs darts to fit it to the waistband.

The spiral seam gets sewn like this, and spirals its way around the leg to the ankle.

I pinned together the spiral seam first and tried the trousers on, and immediately discovered the ankle was too small. It only measured 11cm across and I just couldn’t squeeze my foot through!

So I unpinned them a bit to get them on. The fit was quite good.

Then I went off for a bike ride to think through the ankle problem.

I had been very cautious about not stretching the diagonal side of the spiral seam, and even notched each side at 20cm intervals so I could match it properly. But what if that’s a bad idea and it’s better to let the bias stretch? That would give a bigger ankle section.

I unpinned then re-pinned, disregarding the notches: 13.5cm ankle.

Fourth and final effort: 16cm. Victory! I put a 32cm notch along the bias edge for the ankle.

However, by stretching the bias edge into submission, the seam bulges on the straight grain side because I’m essentially easing it on. After a good press this didn’t look as bad on the finished trousers, and for my second pair I topstitched both sides.

UPDATE: something to try next time is to convert the excess fabric into a dart that’s somewhere at knee level.

This wouldn’t be a problem for larger sizes or elastic-waisted versions, because the angled edge would be longer, giving a longer ankle section.

One of the restrictions with this pattern is that you’re cutting two legs the same, not a pair. To get paired legs, either the fabric needs to be the same on both sides so that one can be flipped (which is what I did) or you need to cut two trousers the same with the fabric paired. Further down this blog post I experimented with adding an extra seam to use fabric that has a right and wrong side.

Once the pattern is sorted, it’s quicker to sew than regular trousers. I sewed the spiral seam on each leg then proceeded as per usual for trousers (zip, waistband, hem).

I was very happy with how mine turned out and I’m wearing them now as I write this! They’re very comfortable and don’t feel any different to wearing regular-cut trousers.

In case you’re thinking about making these and want to cut down on the amount of trial-and-error involved, fyi here’s how I did mine:

I made a paper pattern for the trousers, but you could draw them straight onto the fabric if you record the dimensions and make a template for the crotch cutout.

To get the crotch shape correct, I used a trouser block that I knew fitted.

Here’s what the top of my pattern looks like. You can see there’s a side dart (to shape the waist in lieu of a side seam) and a back dart. To decide on the darts, I cut a waistband to fit my waist then darted the trousers to fit:

If you wanted to make an elastic waisted pair, the top edge (minus the crotch cutout) would need to be at least half your hip measurement so that you could get them on:

Using fabric with a right and wrong side

I wondered if, by adding an extra seam, a single pair of spiral trousers could be cut from fabric that has a right and wrong side.

But that means there would now be two diagonal seams radiating from one’s butt – how would that look?

I added onto my pattern so that there would be enough for the extra seam allowances needed:

I used some taupe cotton drill, slightly heavier and crisper than the navy cotton.

After seaming the pieces back together again, I laid them on top of each other (paired) and cut the crotch curve:

I think it turned out okay!

Here’s where the seams end up – the black line is the spiral seam and the white one is the one I added. I pressed both seams open and topstitched 6mm on both sides:

The verdict: highly recommended for a unique trouser sewing experience!

UPDATE: read about Ecatarina’s spiral trousers, with a better way for cutting fabric that has a right and wrong side.