Last week I went to the Australian Sewing Guild’s convention in Melbourne.  Here’s what happened…

Flying out tomorrow with Mum for the Australian Sewing Guild’s biennial convention in Melbourne.  Leaving the children at home with husband.  Children worried I would never return after watching Air Crash Investigation on TV.

We’re going to the convention’s gala dinner to promote The Dressmaker’s Companion and present a copy as a prize.

Compromises had to be made when packing.  I’m taking my (small, under 7kg) carry-on only luggage with five copies of the book (at 1.1kg each), undies, a toothbrush and gala dinner clothes.

The tale of my gala dinner outfit…

Requirements: lightweight, crease-proof, sewn by me and glamorous.  Ideally to be worn with the same shoes already on my feet (that didn’t happen – packing high heels).

I looked in my wardrobe, extensive as it is, but had nothing suitable.  No suitable fabric in my collection.  No time to order anything online or visit the city to shop (only decided to go to the convention two weeks prior, by the way).  One simply cannot go to a sewing convention dinner to present a sewing book while wearing a shop-bought dress.  Cannot.  It would be like a chef inviting you to dinner and serving takeaway.

Less than a week before leaving I visited my nearest sewing shop.  They only sell quilting fabrics but have a small collection of odd rolls of things like polar fleece, lamé (a single roll), satin, drill and lining.  There happened to be one bolt of black panne stretch velvet at only $8/m!  Bought some for a cowl neck dress same as this one and had enough fabric to add long sleeves.  Sewed it on the weekend and did the hem in the car on the way down to Adelaide.

Touched down in Melbourne on an early-ish flight, along with Celine Dion fans going to tonight’s concert.  Settled in and unpacked my toothbrush etc.  Had time in the afternoon to visit some fabric shops (naturally.  Didn’t want to get kicked out of the ASG).  Went to The Fabric Store at Fitzroy and drooled over their collection of Liberty fabrics and everything else.  Great service. 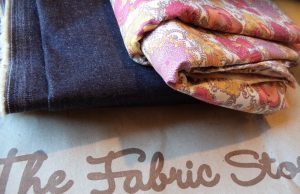 I bought some denim (cotton with 8% silk) for a jacket and some Liberty lawn for a summer dress.  I won’t be sewing them until later in the year though. Also had a rummage through their remnants bin. Gee I love a remnants bin! I don’t visit fabric shops often and online shops don’t have remnants bins.

Gala dinner tonight.  Humbled to meet some ladies who’d bought my book when it first came out.  It was a very friendly, fun dinner.  Every person was beautifully and confidently dressed.  There were some wonderful fabrics, and everyone’s clothes fitted them well.  Not something one sees often. 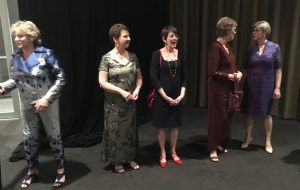 Just some of the beautiful outfits worn. The lady in the middle with the red shoes won “viewer’s choice”. She made her dress at a Susan Khalje couture dress workshop. I’m second from left in my panne velvet number.

Our lightweight packing backfired at midnight when we had to contact reception about air conditioner noise.  We’d gone to bed in our vests because we’d not packed pajamas…had to get dressed again.

This morning we met Hollie of Tools by Hollie.  She showed us her inventions to make sewing easier.  What brilliant ideas she has! This is Hollie’s invention for adding seam allowance while you cut out.

Intended to spend the morning browsing in Tessuti Fabrics before taking a taxi to the airport.  However, got waylaid by a fabulous book shop and only ended up with ten minutes in Tessuti. Outside Tessuti.  There was a sale on but I only had time to browse.

Hopped on our economy flight with the Celine Dion fans in their concert t-shirts (verdict: she’s still amazing) and back in Adelaide by mid afternoon.

Good to be home.  Children happy.