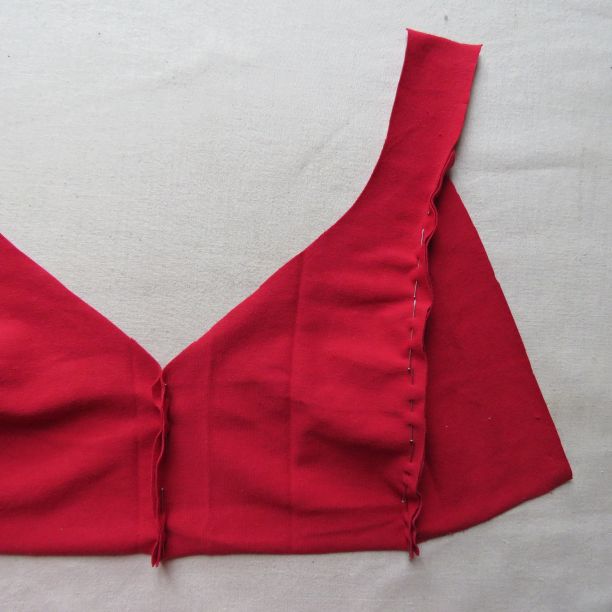 Folks, these are dire times: since Target Country closed their doors in April, there isn’t a bra shop within a 2-hour drive radius of here.

As daughters have growth-spurt after growth-spurt, something must be done – but alas, the options are few.

With these distances, it’s quicker to sew a bra than drive to the bra shop. So that’s what I’ve been doing this week.

Of course, first I needed a pattern.

To start with, I didn’t attempt zero waste because I’ve actually never made a bra before. I know – surprising, but I’ve made plenty of structured swimsuits and strapless tops at work so I’m not a complete newbie 🙂

I looked at a few pictures of bras and took some measurements to make a pattern. There were two books in my professional library that were handy: Ann Haggar’s Patterncutting for Lingerie, Beachwear and Leisurewear and Lee-Ann Burgess’s Making Beautiful Bras.

Failure is not an option with this project: there’s only one chance to impress before Mum-made bras get written off, forcing a drive to a bra shop.

The second bra with the adjustments made was intended to be worn to check for comfort, but it wasn’t deemed supportive enough even though the fit was spot-on (after a minor cup adjustment).

Not defeated yet! For the third bra, I decided to change tactics and make one in stretch fabric, a bit more sports bra-y.

It turned out there were two bra styles. Out of curiosity, I tried the second one to see if it would fit.

Unfortunately I could see it was going to be too small in the cup department, so I didn’t get any further – I didn’t even sew it up. The pattern is a single size with no provision for making it bigger.

But several inspired ideas have sprung from this bra, the biggest being that it’s not impossible! Until this year I had kind of written-off the idea of undies being zero waste without even exploring the possibility.

“If you think it’s too difficult, then you must try it” was my mantra for the fourth bra, as I aimed for both zero waste and multiple sizes.

My thoughts are that the key is modular pattern pieces, so that even if it isn’t zero waste for one whole bra, all the pattern pieces form squares or rectangles (and who ever makes just one bra? You need at least 3). Here’s my pattern:

It doesn’t look too special here, but I did a fitting this afternoon and I’m smelling victory.