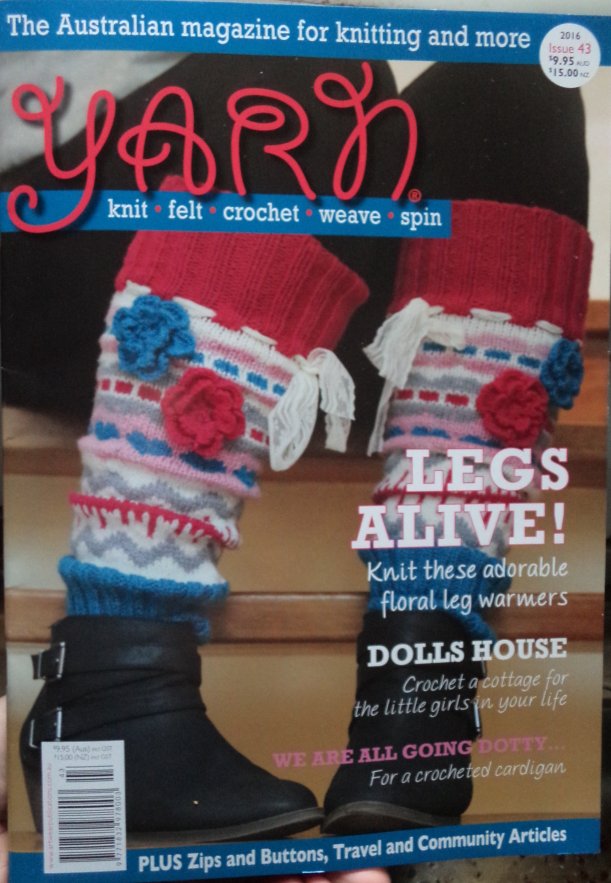 Yarn magazine issue 43 came out this week featuring my very last article, aptly named Get some Closure.  It’s been almost six years since I began writing articles for Yarn, and ten years since they published my first project.  There are no terrible reasons why I’ve decided to stop being a contributor; I’ve simply just run out of steam.

You may be interested to know how I began writing for magazines.

Before Yarn magazine existed I wrote knitting patterns for Creative Knitting magazine.  It was 2005 and I’d just discovered Interweave Knits magazine and wondered if there were any Australian knitting magazines; I found Creative Knitting at my newsagent.  I flipped through it and looked at the patterns and thought: I could do that.  Knitting patterns aren’t too different from making sewing patterns (and I’m a clothing patternmaker).  I phoned the editor.  “Oh yeah” she said in her English accent “just send the garment in with the pattern -we print everything we get”.  Was it that easy?  As with Yarn magazine, the designer writes the pattern and knits the garment, then posts the garment to the magazine to be photographed.  The garment is returned when they’re finished with it.  The pattern is emailed. 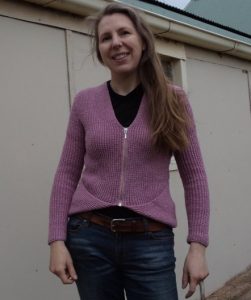 Yay!  My very first project, a ribbed zip top for issue 13 of Creative Knitting.  The sleeves are as tight as compression bandages; it was too late to re-knit them although I certainly did change the pattern. 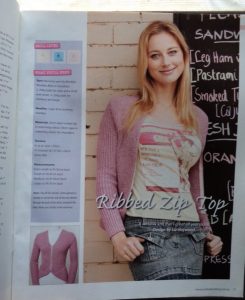 Here it is in the magazine

I wrote patterns for Creative Knitting for about a year, until they sacked all their staff one Friday afternoon.  In the meantime, Yarn had started but I didn’t have the energies for two magazines, and besides, I had already established a rapport with the Creative Knitting editor (or should I say editors, because the editor changed remarkably often!).

When things finished with Creative Knitting (which I notice is still around), I sent a project to Barb at Yarn.  She lived in the next suburb from me, only a short bike ride away.  Her Yarn office  was the spare bedroom, converted into an inspirational, groovy, yarn-filled, bookcase-lined, great place to hang out.  She was also a really interesting person to talk to about magazines, design, art, and stuff like that.  I also made friends with Sarah, who wrote articles and projects and lived in the next street.

Barb eventually sold Yarn, and Michelle became the next editor.  Sometime after that I had a baby and no longer had time to write patterns.  Instead, Michelle asked if I would like to tech edit other people’s patterns.  It’s very bad news to publish patterns with mistakes in them, so all of Yarn’s patterns are checked by someone else other than the designer and editor.  The tech editor is emailed the pattern and a photograph.  Equipped with a calculator, tape measure and red pen, the tech editor goes through the pattern and crunches the numbers and makes sure everything tallies up (the tension, number of stitches, the schematic, etc), and also highlights any ambiguities.  Yarn likes pattern writers to keep their “voice”, rather than write the patterns like you might see in a Patons or Cleckheaton pattern book.  The emails flow back and forth between tech editor, editor and designer until all are satisfied.

I did this for a while, then asked to write a couple of articles about topics I thought we should have articles on (one was grading knitwear to create a range of sizes, and the other was on argyll).  My writing has improved dramatically (I think) since I did those -I think I could do them much better now.  Michelle is a kind woman who cared to give new designers and writers a chance.

Then, in 2010, the tech feature writer resigned and Michelle asked if I wanted to do it.  I really did want to, in spite of being about to move house and expecting baby #2.  I could write about any topic I liked as long as I discussed it with her first.  Thank goodness Yarn is only a quarterly publication, because it took me a long time to write each article.  I always started them early and did them in spare moments -knitting samples in the car, photographing them when Play School was on, etc.  It was interesting and fun.  I did research, ordered books, emailed people, photographed swatches, and wrote several drafts trying not to sound like an insufferable smarty-pants know-it-all.  I sometimes selected topics to fit in with themes in particular issues (like cables or lace), and sometimes I submitted a companion project to try out a technique.  I tried to write a mixture of  technique and discussion-type articles.    Actually, writing articles really helped me spread my wings technique-wise.  I discovered lots of things I wouldn’t have otherwise, and would have still been stuck in my old rut of same cast-on and cast-off, never doing cables or colourwork, etc etc.

Michelle finished up, and Glenda started, bringing new ideas and enthusiasm to Yarn.  And now here we are at Gaille’s first issue and my last.  Wishing you all the best, Gaille, in your new role as editor…

…and may we all encourage and inspire one another!