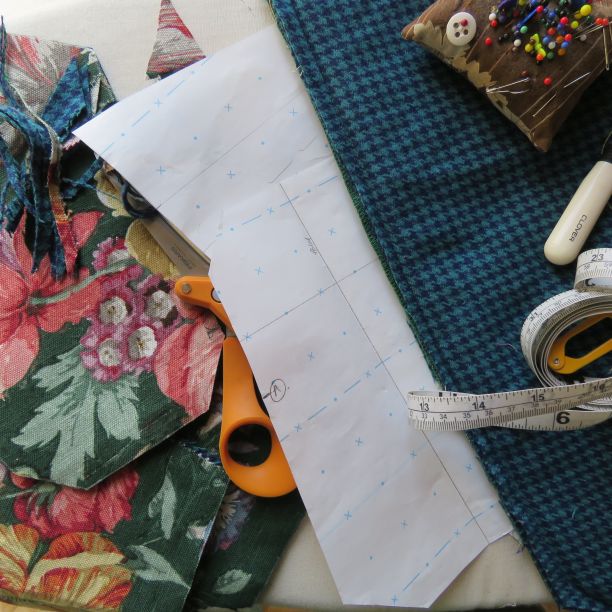 Things haven’t been going all that well in Oven Mitt Land.

To recap last week, after the oven mitt situation was declared “dire”, I resolved to make some new ones using fabric we had at home. I came up with some low/zero waste ideas, and this week I tried them out.

I had two ideas, and I started with the easiest one to sew.

This was to create a tessellating pattern for a basic mitt shape:

Unfortunately, it didn’t work. This is a classic example of an idea looking great on paper and failing in real life.

My oven mitt looked like a cover for an adjustable wrench!

The thumb was too narrow and the curved shape, which looks ergonomic as if one were grasping a dish, is wrong when you actually have your hand in it.

The other idea, which I really liked, was to use a single pattern piece. I loved the simplicity.

This too, ended in tears. Not real tears.

So…I had two promising ideas, I only needed one of them to work, and neither of them did (so far). My post-covid brain was too tired when I finished sewing these to think of a solution, so I left them for later.

The tessellating mitt I decided to mark as a fail and not pursue further; I can’t see the thumb width/curved hand shape working.

But while the pattern is a fail, all is not lost. I cut off the top part…

…and made it more classically oven mitt shaped.

The thumb is still a bit narrow, and so is the opening, but it might suit one of my children.

For the other mitt, I had a re-think and made a new, more tapered, pattern with a seam at the top of the fingers and thumb. It’s not zero waste, but it has pieces which can be top-and-tailed to reduce waste.

The hexagonal shape at the top of the fingers and thumb looks curved when it’s sewn, because the layers are so thick.

I re-cut the pieces from the first sample. Now it looks like this, and it fits really well.

This one I’ll finish off properly and trial it in the kitchen, and report back in a couple of weeks.

As well, I’ll repair the Harrods oven mitt to try and make it last a bit longer. It’s only the (Union Jack!) palm that’s worn out.

So, although things didn’t turn out how I thought they would, I’ll soon have two usable oven mitts.