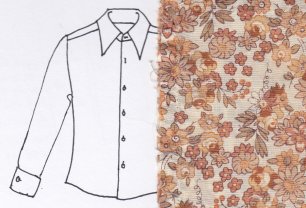 During my 1970’s childhood, my Dad had a body shirt in an orangey/yellowy/ browny floral Liberty print.  It was originally a special shirt but became a gardening shirt at the end of its life.

It had worn out by the time I was a teenager, and Mum gave it to me and I unpicked it.  (Why did I do this?  Maybe I wanted to make a pattern from it, or use the fabric, or just see what it looked like from the inside.  I do remember in my teens being insatiably hungry to learn about patterns and sewing.)

Over the years I harvested parts of it for other things, like little stuffed toys, applique, etc.  I came across the remains of it the other day.

If you are into shirt making, it has a few interesting things to look at: 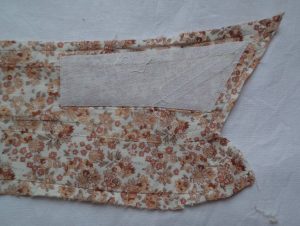 A typically long pointy 1970’s collar.  This is the under collar.  It’s interfaced only at the points, inside the seam allowance.  There’s a collar stay stitched to the stiff woven fusing, now sandwiched in between the fusing and fabric. 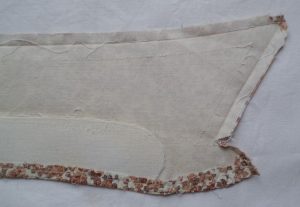 This is the top collar.  It has two types of fusible interfacing on it:  A lighter one has been applied all over (except the lower seam allowance for the neck seam), and a stiffer fusing (3.5cm wide) on the collar rise.  It’s fused over  the top of the other one.  There was 1cm topstitching around the edges of the collar leaf.  I was surprised the shirt had a one piece collar instead of two piece. 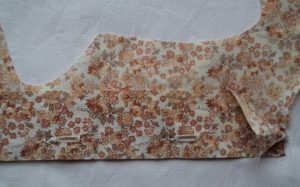 All that remains of the shirt fronts is this buttonhole placket.  Interestingly, there’s no interfacing at all on the front placket, or even a double layer of fabric.  The selvedge edge has been simply ironed back 4cm and left unstitched, with just the buttons and buttonholes to keep it in place.  The selvedge on the Liberty fabric is so fine it just looks like a cut edge. 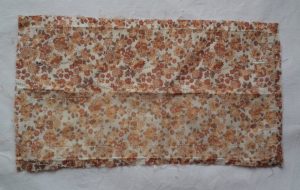 There’s only one shirt cuff left, and it’s fairly regular looking.  There’s no interfacing with it, so I conclude the cuffs had sew-in interfacing.  The cuffs aren’t particularly wide (6.5cm finished).  I no longer have the sleeves. 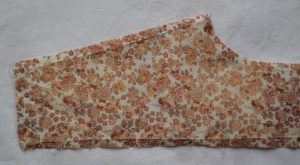 The yoke is very slim, only 5.5cm deep at the centre back. It’s a double layer of fabric, as usual, and has no topstitching. 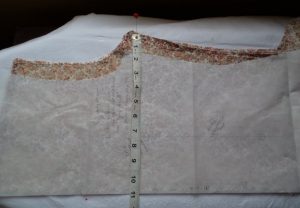 The shirt back is nearly whole -obviously the fronts were better for cutting up.  Over the top I’ve laid the back of my own shirt pattern.  I’m wearing this shirt here.  Dad’s shirt would only be 6″ bigger than mine at most, and Dad wasn’t especially thin.  Body shirts were worn pretty skin tight!  There are no back darts.  The hem is straight; no shirt tails.

I noticed, as a patternmaker, that the shirt had been made in metric, not imperial.  I thought they might still be using imperial in the 70’s; it takes time to change to a different way of working.  I worked at places in the 90’s and early 2000’s (in Australia) that still used imperial!