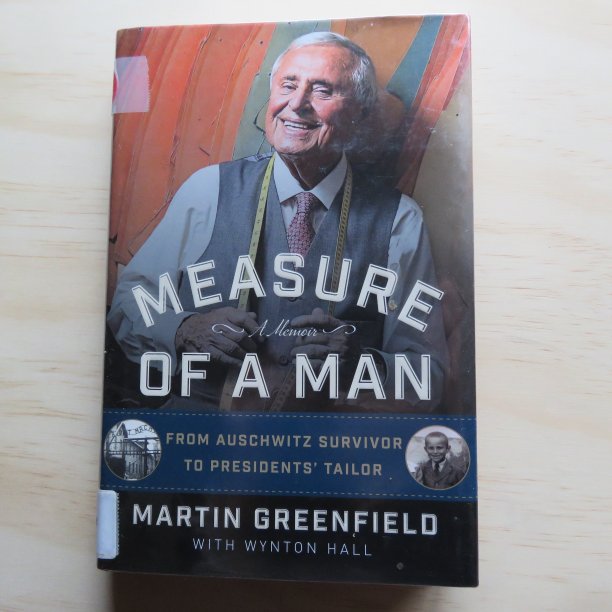 Measure of a Man – From Auschwitz survivor to presidents’ tailor is the memoir of Martin Greenfield, considered by many to be the best men’s tailor in the United States. I read this book in one day!

Martin Greenfield grew up in a Czechoslovakian village by the Carpathian mountains. When he was 15, he and his family were forced to leave and were transported to a Jewish ghetto then to Auschwitz concentration camp. His parents, brother, two sisters and grandparents all died. Martin survived a death march to Buchenwald concentration camp and was there when the Americans liberated the camp in 1945.

A man in the concentration camp showed him how to sew, and Martin became aware of the power that clothing possesses and what it represents.

After the war he spent two years in Europe in limbo, looking for his family who were all gone. He went back to his home, but it had been taken over.

He learned of extended family in America and at age 19 arrived as a refugee in New York. He anglicized his name from Maximilian Grunfeld, got a job at GGG suit factory via a childhood friend who worked there, worked hard, learned to speak English, worked hard, got a second job as a clothes presser, worked hard, learned everything he could about hand tailored menswear, worked hard. Thirty years after arriving in New York, he bought the GGG factory, re-naming it Martin Greenfield Clothiers.

His uncompromising manufacturing standards (no fused or glued interlinings), high quality materials and the personalized customer experience that private clients receive has ensured the longevity of his business. His passion for a well-fitting suit runs deep. He claims to cross the street so he doesn’t have to walk past a horrible cheap suit.

He talks about dressing politicians, presidents (he’s dressed eleven; every president since Eisenhower), what happened on September 11, dressing celebrities and doing costumes for movies and TV. I hadn’t heard of many of the actors, sports stars or shows (I guess I don’t get out much, or maybe they haven’t made it to Australia).

A constant thread running through this book is Martin’s love for his family: his own that he lost, his family in America that he didn’t know he had, and his wife, children and grandchildren. He also speaks lovingly of America, his new country.

Martin Greenfield is now 91 (this book was written in 2014); here’s a 4-minute interview with him.

Measure of a Man is a highly recommended, interesting and very readable book.