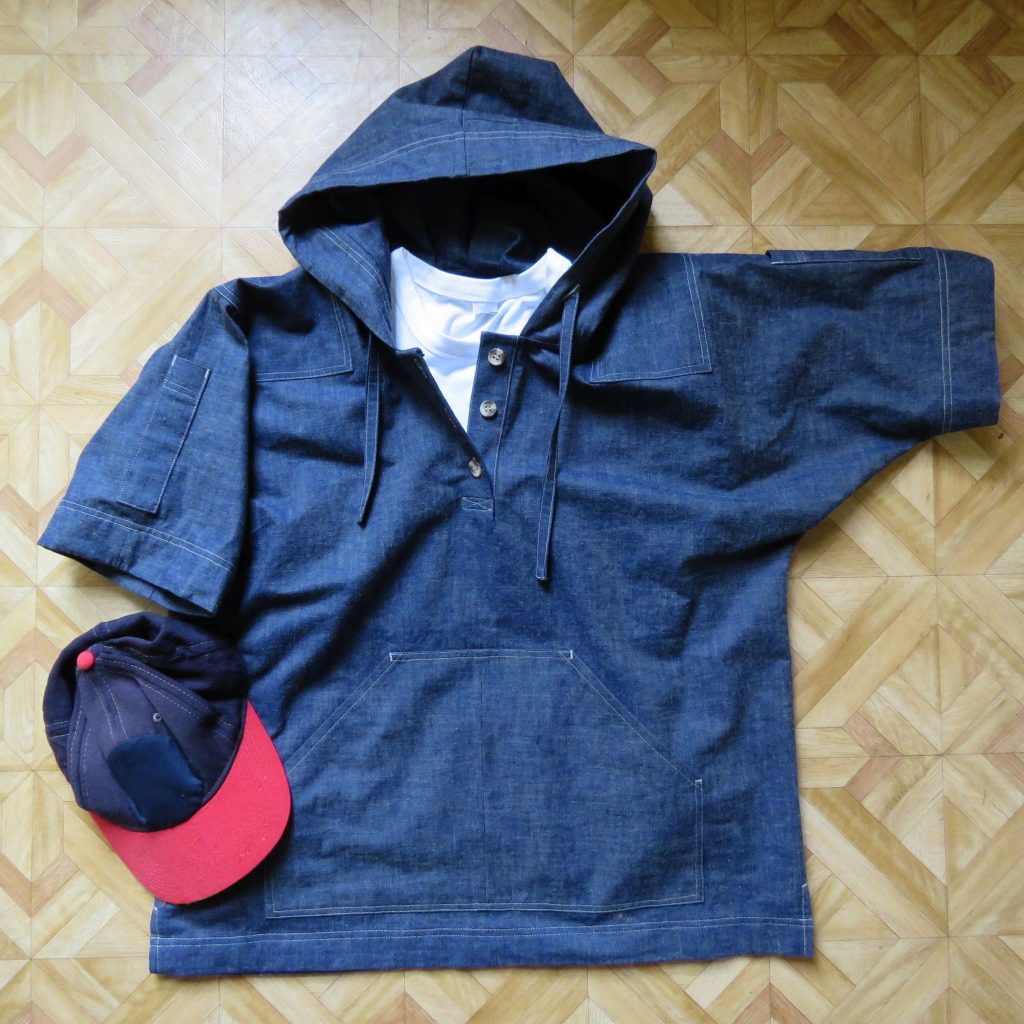 The Sawyer hoodie is a zero waste pattern I released last month after a series of blog posts “show and telling” its development as it unfolded. The final post is here.

As a sort of adjunct to this I asked 3 friends who are prolific and adventurous in their sewing to give the pattern a try. By coincidence, they all chose blue fabric (as I did, funnily) which makes for a beautifully colour coordinated blog post!

Here’s how they went….

Sue lives in Western Australia and blogs at fadanista.com. She’s tried quite a few zero waste patterns before including some in Zero Waste Sewing (she participated in the book’s blog tour). Sue often uses second hand textiles and sometimes eco dyes fabrics. She wrote a whole blog post on sewing this top, which you can read here, so this is a bit of an excerpt.

She thought the 26.5cm of ease too roomy and went down a size, which turned out to be just right.

Sue used a thrifted gingham curtain from Ikea. The fabric had a pretty selvedge, which she kept as a detail, and instead of hemming the sleeves she gathered them in with shirring. This is very much in the flavour of zero waste design and sewing – using what you have and making the most of it.

Sue concluded: I initially thought the top was a bit too utilitarian for me – with the pen pockets on the sleeves and the shoulder reinforcement pieces, and even that kangaroo pocket at the front. However, I would really like to sew a floral version, or one from a drapey rayon. I think fabric is everything – utilitarian if that’s what you want, or more dressy if that’s your thing. I’m definitely looking forward to styling this with lots of things.

If you have an interest in zero waste, this is a good garment to make.

Andrew of SewAndrew lives in the UK and has sewn practically every item of menswear you can think of and more (except a zero waste top).

He felt the hoodie had a bit a fisherman’s/artists smock vibe and quickly whipped one up in time for a trip to Cornwall, where he took these beach photos.

He had some blue linen that was a bit wider than the pattern called for, so he just went with it, which made the body and sleeves a bit longer. This had a knock-on effect to the pocket and other pieces which left him with a few bits leftover – he used those up by adding deep cuffs to the sleeves and buttoned tabs to hold the sleeves rolled up. I just love it when there’s a departure from the instructions and people make it their own.

Andrew picked a size 14 for a 40″ chest but said it’s definitely a very ‘comfy’ fit. I could probably size down (and will) on the next one. (Note: this top is easy to make smaller without changing any of the details; the side seams can be simply run in.)

Overall it was a really satisfying sew and I’m happy with the finished hoodie. It’s a great ‘throw on’ piece of clothing and I can imagine it working in many different fabrics (I’d quite like to wax this linen one if I can find the right product…)

Duane of Mainely Menswear lives in the USA and began sewing in order to have a coat in a colour other than black, ended up making every coat in a Japanese coat pattern book, and is now probably the best-dressed man in Maine.

This was his first time making a zero waste pattern. He said: this was a fun make, and WAY outside my usual way of working! The instructions were crystal clear, and it was fascinating to see the various shapes combine to make a wearable garment.

For something different, he dyed some white fabric using an indigo dyeing kit.

Duane actually went up a size (his chest measurement and top are the same as this one).

He said the top came out 99.9% zero waste! He used fusible interfacing behind the hood’s buttonholes instead of the back neck strip.

Many thanks Sue, Andrew and Duane for giving this a whirl! I really appreciated your time and enthusiasm, and so glad you had fun with it.

PS: here are two other, very different, Sawyer hoodies: Michelle made one with long sleeves in linen for her husband and Esther used two fabrics and made hers like a sweater.