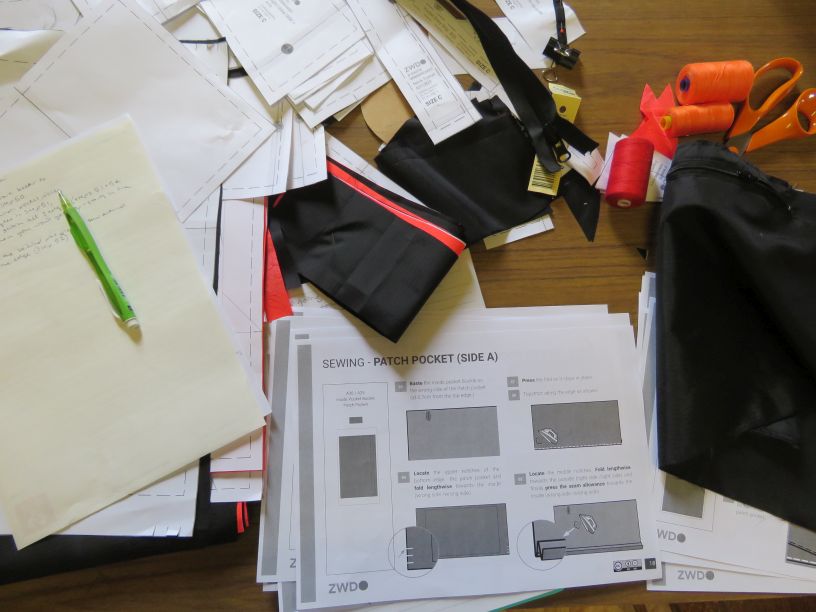 Serious sewing has begun on the Kiabi windbreaker, a zero waste pattern which you can read about in last week’s post.

I’m in familiar sewing territory with this project, because I used to work in a factory that made similar things. Don’t envy me; it was during The Great Parachute Tracksuit Era, circa early 1990s.

The Kiabi windbreaker is a reversible top – it’s essentially two windbreakers, one inside the other, with shared collar, cuffs and waistband. Both sides are almost the same but one has a front zip pocket and the other has a patch pocket. I’ve used black nylon ripstop for one side and neon orange (pronounced: ORANGE!!!) for the other.

During the week I was thinking….I’m going to change it to be not reversible and instead make two single-layer windbreakers. I think two layers will be too hot to wear here, and since I’m planning to wear it on my bike, I’d like a cycling top to fold up really small when I take it off.

I know some of you are “following with interest” on this project but are intimidated by the 71 pieces involved, so maybe a single-layer windbreaker is a more reasonable plan.

So now I’m making two windbreakers, one black and one ORANGE!!! The shared parts in the original were in black, but I had a strip of ORANGE!!! left over which is just enough to cut a second set of new collar, cuffs and waistband. I’ll see at the end if there’s enough for a pocket. I bought a blue zip and cord for it.

After a day of sewing, I had an ORANGE!!! windbreaker far enough along to try on.

(The black windbreaker is partly sewn but still in pieces, not enough to try on. Alas, I stuck a too-hot iron on the front – looks like the black fabric isn’t quite as robust. Cool dry iron, please!)

Join me next week!