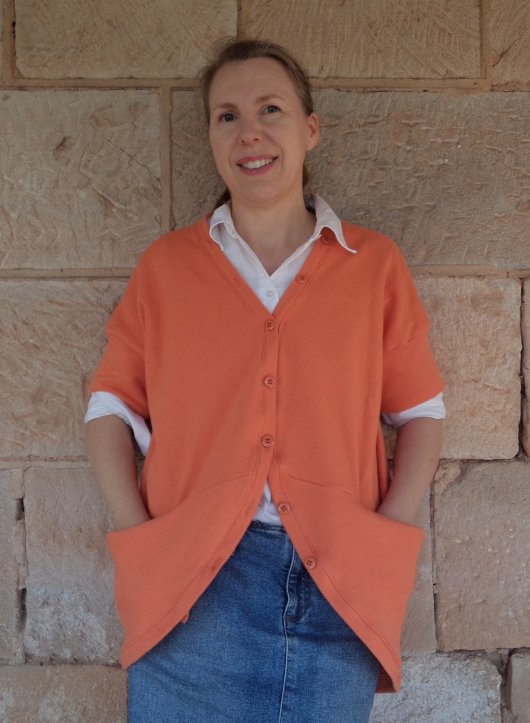 An intriguing construction and silhouette motivated me to make this cardigan from the Japanese pattern book She Wears the Pants by Yuko Takada.

The title suggests a book of trouser patterns, but it’s translated from She Wears Mannish Style and features mainly tops and pants with an androgynous “menswear for women” look. I liked the simple, clean lines and interesting styles. 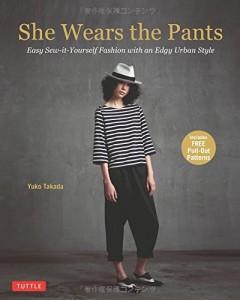 Draped cardigan is the first style I’ve made from this book.  It’s a departure from my usual look, but I like it.  I usually favour neat-fitted cardigans with high round necks and long slim sleeves.

Tracing off the pattern was tricky, with a large number of the pieces overlapping on the pattern sheet.  The pattern is very unusual, consisting of one large piece forming the front/ back, a smaller piece for the lower front/ back (these two pieces when sewn together cleverly form the front pockets), and sleeve cuffs and front band.

I chose a size large since that’s what my measurements matched on their size chart, but now I think I could have gone smaller. My cardi ended up looking a lot baggier than the model’s, but I still like it…in a 1980’s kind of way.

Looking in my fabric stash I found an orange knit -I think you would call it an unbrushed fleecy.  It’s a little thicker than t shirt fabric.  The fabric has to be at least 156cm wide to accommodate the large pattern pieces.

I made the cardigan as the pattern and instructions, and it came together easily.  I had reservations about the large back neck but I left it.

The back drape is obviously the key feature of the design, but it felt strange carrying all that extra weight of fabric off the back.  Just wasn’t sure if it was all that comfortable. 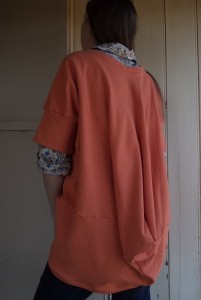 Now that I look at the photos, it looks like an orange academic gown!  Note that droopy back neck. 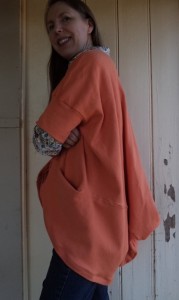 Here’s the side view.

A week later I decided the drape wasn’t for me, so I lay the finished cardigan on the table and cut it off.  I decided I could live with a centre back seam more than a back drape.  At the same time, I took the opportunity to make the back neck less wide. 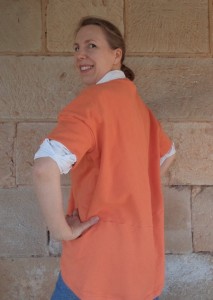 The back view after the chop.

So would I recommend this pattern?  Well, yes.  I found it interesting to sew.  It’s very comfortable to wear, and I might even make it again (although much as I liked the idea of the back drape, I wouldn’t include it).  If I wanted to wear it as a top rather than a cardigan I would choose a t shirt fabric and make a smaller size.