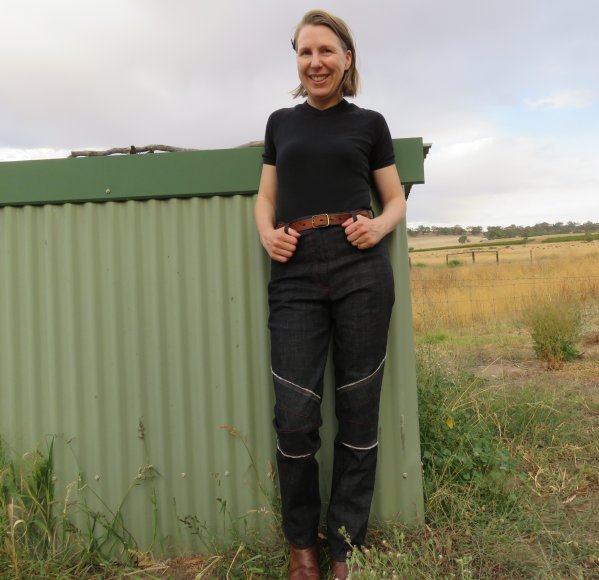 On the weekend I finished my zero waste jeans, and here they are!

Read about my research and the beginning of my quest, cutting out, and the start of sewing them.

The sewing turned out to be fairly straight forward, much like sewing ordinary jeans.

There were some unusual shapes which were tamed as I pressed and sewed. For example, the back pockets have inconsistent seam allowances. Here they are before sewing on:

Those horizontal wrinkles below the seat are due to my posture in the photo (the ground slopes and I’m leaning back) not poor fit btw.

The belt loops were made from a long strip with tapering ends.

The tapered ends were simply pressed under less as I made the belt loop, to compensate for being narrower.

While not all the belt loops turned out to be the same width, they are symmetrically placed on the jeans.

The back of the waistband has a different seam allowance than the waist’s, which I could have avoided if I’d thought a bit harder during cutting.

I bound the fly facing and front pocket bags instead of overlocking. I wouldn’t normally but there was motor sport on TV on the weekend (Clipsal 500) and I’m banned from using the overlocker during the telecast. Too noisy. Ditto for bobbin winding. (I can get around this by doing it during the ad breaks though.)

Note the shape of the fly shield which is wider at the bottom.

These jeans have knee patches made from off cuts. I’m not so keen on the idea of disposing of scraps as applique, although I always did want knee patches; my jeans tend to wear out first in the knee department. I didn’t want it to look like I just cut out a pair of jeans and put all the scraps on the knees.

Final reflection: I set out to make a pair of zero waste jeans but ultimately I failed on the zero waste part; I have a handful of small denim triangles remaining. In my mind there are no levels of zero. Zero is zero.

However, the project was a success in other ways. I have a pair of jeans I like. The experience will lead to improvements for the next pair. I found out about using Coke to soften denim (thanks Chris Schwab!). I realised how hard it is to cut zero waste patterns with expected outcomes and why we aren’t mass-manufacturing zero waste jeans.