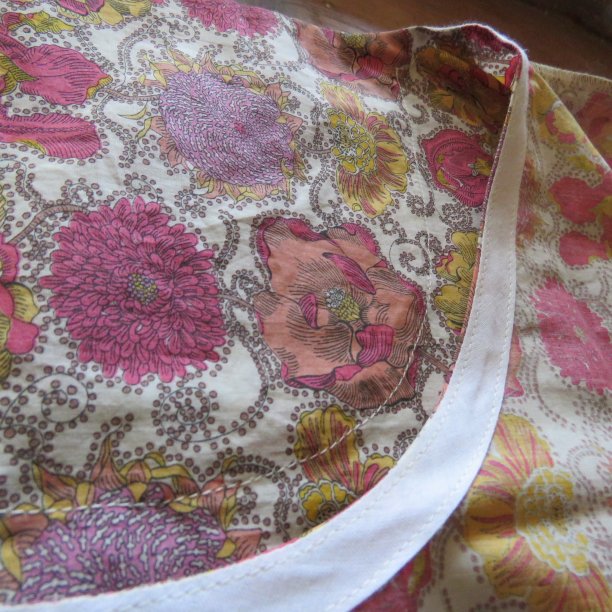 One of the techniques I used in Zero Waste Sewing was facing an edge using bias binding. Specifically, I used it for necklines, but it also works well for other edges such as armholes and pocket openings. The edge can be straight or curved.

The finished edge looks clean with a single line of visible stitching.

Below is the armhole of a dress – the dress’s side seam was sewn after the bias binding facing was applied.

Bias binding, either purchased or home-made, is a great thing when you’re making zero waste garments because no fashion fabric is required to finish the edge. With zero waste layouts, it’s important to include all the pattern pieces needed to complete the garment (including facings and trims for edges) because you can’t just cut them out later; they need to be in the layout. It doesn’t always work out that way though, and bias binding is your best friend when it doesn’t. Bias binding is also handy for any other type of garment where you’ve run out of fabric.

Step 1. At the ironing board, arrange the neckline right side up, flat.

If you can’t shape the bias binding easily around the sides because it’s too curved, trim the edge a little to straighten it off.

If the neckline happens to have a back neck facing, lap the ends of the bias binding over the edges of the facing.

Step 3. Stitch along the crease line where you’ve pinned. Continue the stitching over the back neck facing, if you have one.

Step 5. Turn the binding (and facing) to the wrong side of the neck, where it will sit flat due to the curved shape you pressed it in. Press.

Step 6. Pin, then stitch in position with the binding side uppermost. Watch the seam guide on the machine so that the stitching for the bias binding is an even distance from the edge (you’ll notice the bias binding is slightly skinnier where you’ve taken it around the curves). If you don’t want a visible line of stitching, this can be sewn invisibly by hand.

If there’s a back neck facing, stitch the whole thing in one fell swoop.

Step 7. Give the whole thing a good, solid press.