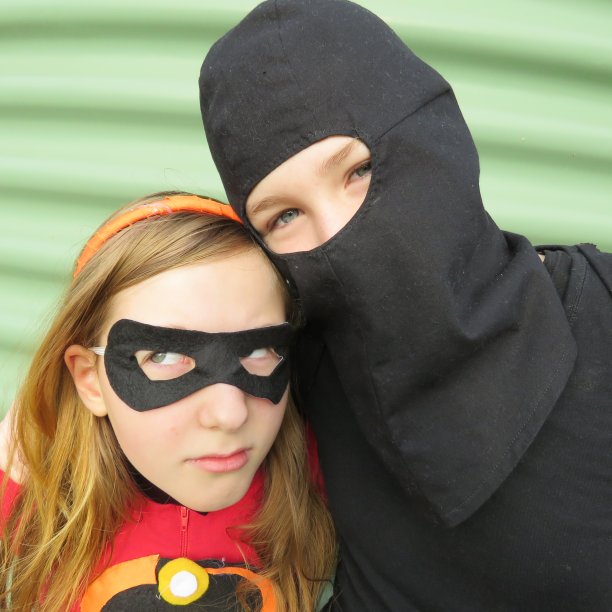 It’s been a week of creativity here at Haywood Homestead. The dress-ups box was raided and the hot glue gun’s been going overtime, as the finishing touches were put on book week costumes.

The doomed Lucky Prescott costume (see last week’s post) got replaced by Plan B: I converted the Ladybug Miraculous catsuit (made for this fancy dress party last year) into….

…Violet from The Incredibles. This is probably the last year the catsuit will fit anyone.

I was secretly hoping that my favourite 8 year old would just submit to being Ladybug, saving me the work, but unfortunately no. Still, it was no big deal. I unpicked all the ladybug spots (which were just tacked on – I pulled on the knot and the thread slid out). We added a pair of old black sports briefs and made an orange belt.

The chest logo and mask are both felt. The logo was hot glue gunned together as only an 8 year old knows how.

I had some black gloves in the adult dress ups box from circa 1990 and she wore black rubber boots (but not the brown Lucky Prescott pair – they’re still in the laundry awaiting a clean with turps. No-one wants to do it.).

My favourite 10 year old went as Diary of a 6th Grade Ninja.

The ninja costume got sorted last week but we made duel scabbards attached to a harness. The idea is she reaches behind with both hands and draws two swords simultaneously.

So everyone was happy and they had lots of fun. The whole school did a book week parade along the main street of our country town and we all watched and waved.