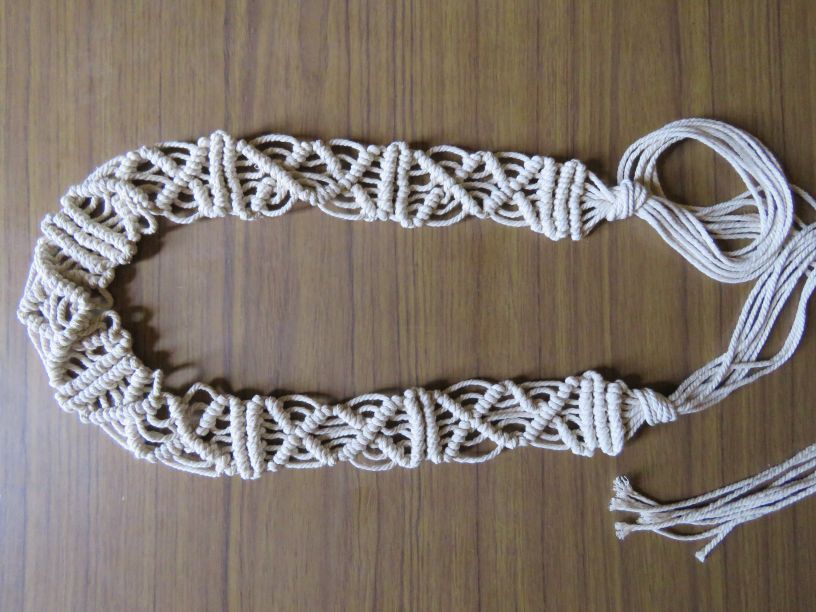 Hi Everyone! Happy New Year – I guess I can just say that before January ends!

It’s still school holidays here, although the carefree days are drawing to a close.

At the beginning of the holidays, I thought it would be fun to try a few new crafts together, with one of them being macramé. Unfortunately, I couldn’t whip up any enthusiasm for it.

However, even if no-one else was interested, I thought I’d do some.

It’s not my first time doing macramé. I tried it when I was about 10 or 12. I made a macramé dog lead in the hope that my parents would buy us a dog, but they didn’t, so I gave the lead away to some friends who did have a dog.

I’d bought some macramé cord, and Tracy of Knit-Spin-Weave kindly lent me her archive of 1970s macramé books. These books are amazing – the instructions are excellent. As anyone over the age of 50 knows, the 1970s were a renaissance time for macramé, and all sorts of other crafts too.

I borrowed some books on modern macramé from the library as well, but they were mainly home decor macramé.

I saw a belt in one of Tracy’s book and though I’d give it a try. The instructions were brief but there were good how-to illustrations for making the actual knots.

But I didn’t really know how to actually get started. I dithered a bit on Youtube before going back to the book and taking a better look at the photo, and thought I should just try.

Once I got started and was about 8cm in, I hit the groove. It’s kind of addictive in the way tapestry is “just one more row”.

Just over half way through, I had a horrible feeling I didn’t have enough rope left. I continued on anyway, not feeling very good about it.

But then I made the happy discovery that macramé stretches, so I did have enough and didn’t have to make the belt as long as I first thought.

By the way, I hope you’ve noticed I’ve photographed these on our deeply unfashionable faux-wood laminate kitchen table, which is the same era as the macramé books.

The belt in the book didn’t have a buckle or fastening – the ends were just tied together in a knot, as a tie belt.

In the interests of nostalgia, here’s a gallery of some of the macramé projects in the 1970s books. Many of these could be re-made, re-photographed and be published today (and some not).

I didn’t know that Kaffe Fassett designed macramé as well.

Have you done macramé, either lately or a long time ago?