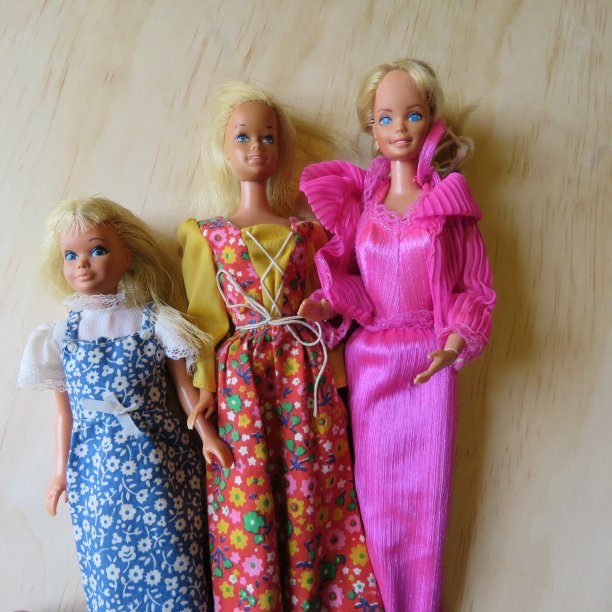 March 9th is the 60th birthday of the barbie doll.  While there’s much to be read on the history of Barbie, today’s post is my tribute to my own.

Yes, while Barbie is controversial and perpetuates unrealistic body expectations for girls who we’re trying to raise into confident, happy women who are comfortable with their own bodies (as does the fashion/beauty industry), I felt a wave of nostalgia as I remembered The Barbie Doll Years.

My sister and I spent many afternoons sitting on the bedroom floor dressing barbies, making outfits and doing their hair. As a young girl I enjoyed sewing clothes for barbies before starting to make my own clothes as a teenager.

I still have my three barbie dolls. When I dug them out to photograph them I was disappointed that there weren’t any me-made barbie clothes in the box too. They must be in another box (in the shed?) but I couldn’t even begin to guess where.

Mattel have been inventing new barbies all the time with different careers, cultural heritages and body shapes.  Among them is a barbie in a wheelchair with a prosthetic leg.  This made me remember a disabled barbie we had: my sister’s barbie doll lost a leg when some neighbours came to play one day.  After that she was dressed in long skirts but fortunately it was the 1970’s and maxi dresses were in fashion.  We had the leg but no lasting success re-attaching it (Mum tried Araldite).  On their next visit, the poor doll lost her other leg, and spent the rest of her days wearing long dresses and sitting in a chair.

My own girls had a barbie who lost a leg, and I was about to throw the doll away (she wasn’t a “real” barbie doll), but they wanted to keep her and they showed her extra love and care.  I was touched by their compassion.

Do you have a fond barbie doll story?

Posted in Uncategorised and tagged barbie